With the fall semester coming to a close and an estimated 18.72% of Clemson University students having tested positive for COVID-19, there has been a wide range of experiences from those with the virus. Students have ranged from being wholly asymptomatic, having symptoms described as worse than the flu, to only now getting back their senses of taste and smell months after their positive test result.

Similar to how symptoms can differ between positive individuals, the response by Clemson University can differ as well. Whether a student tests positive or is just exposed, and whether they are on- or off-campus, can change the resources available to them throughout their isolation or quarantine period.

Many new terms have entered into common use over the past year as a result of the pandemic, two of which are frequently used by Clemson: isolation and quarantine.

Isolation is a result of testing positive for COVID-19 and the university requests that all who test positive isolate for at least 10 days.

Quarantine, on the other hand, is for those who are exposed to someone who has tested positive. Exposure is defined by the university as being within six feet of someone who has tested positive for more than 15 minutes without a face covering on. The South Carolina Department of Health and Environmental Control (DHEC) then recommends that students quarantine for 14 days and are tested seven days or more after the date of exposure.

Students can start in quarantine and end up in isolation, as was the case with Ashlyn Wages, a freshman elementary education major. She was exposed but tested negative with a rapid test at Redfern Medical Center. She then tested positive with a more accurate nasal swab test two days later.

“My roommate and I were sent to the Best Western for quarantine, and then two days later my other test result came back positive, so they took my roommate away and sent her somewhere else,” explained Wages.

Wages’ room was located at the Best Western Plus on Tiger Boulevard. The room faced an indoor atrium and did not have any exterior windows as a result. It also overlooked a conference center and had a balcony that Wages explained could be used to talk to other Clemson students from across the hotel. Wages only used the balcony for the first couple days of her stay, though.

“Once I tested positive, they told me I couldn’t go out on the balcony anymore. There was no window and I was stuck looking at the same thing for ten days,” Wages said.

Wages’ isolation experience was during the spike in cases following on-campus move-in and the start of in-person instruction. Wages was one of 588 Clemson affiliates (students and employees) who tested positive the week ending Oct. 3, when there were an estimated 868 people in isolation for COVID-19.

Towards the end of her isolation, the university began to allow time outside.

“They would let you walk around and have activities for people to do,” Wages said. “There were separate times for people in isolation and people just exposed.”

As of Oct. 28, Clemson had an estimated 867 beds allocated for isolation or quarantine. These beds include space on-campus at Thornhill Village, in former Greek housing and Lightsey Bridge, as well as off-campus at the Best Western Plus and The Pier.

Aramark, the dining partner on campus, provides meals to students in isolation and quarantine. The meals are then made specifically at the Madren Center. Those who have dietary restrictions and require allergen-free or meat-free meals receive a True Balance meal from Schilletter Dining Hall.

Laurel Taylor, a freshman microbiology major, spent 14 days in quarantine after being exposed, and she considered the meals a point of contention. Taylor was in quarantine at the Best Western around the same time as Wages.

“In the beginning you get this big box that has bread, peanut butter, jelly, little snacks, ramen and some fruit,” Taylor said, detailing the food provided. “Every day you get a delivery to your door that has your lunch and dinner in it, both cold, and you heat it up in the microwave.”

Taylor, in describing her meals, stated that it was “the worst food ever.”

Ava Knoske, who is a former resident assistant and senior industrial engineering major, felt differently about the food.

“The food was good,” Knoske said. “I’ve lived off of it for four and a half years, so I’m used to it. You definitely do not go unfed; they give you so much food it’s kind of insane.”

Knoske was actively in isolation as she spoke to The Tiger earlier in November. This occurred when she was 1 out of 74 being provided on-campus accommodations for isolation or quarantine, and only 1 out of 169 Clemson affiliates in active isolation for COVID-19 on Nov. 5.

The Tiger is connecting with the Aramark manager responsible for overseeing the COVID-19 meal process and will post updates and quotes when available. 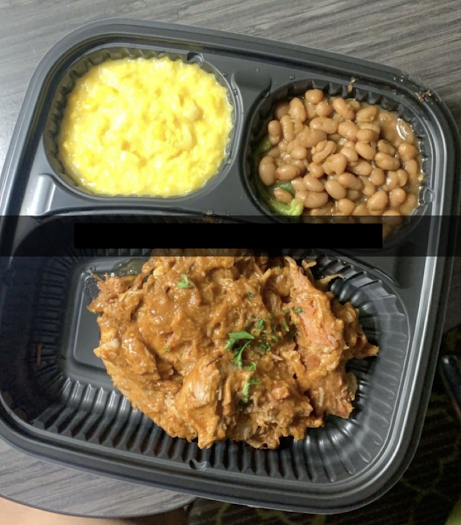 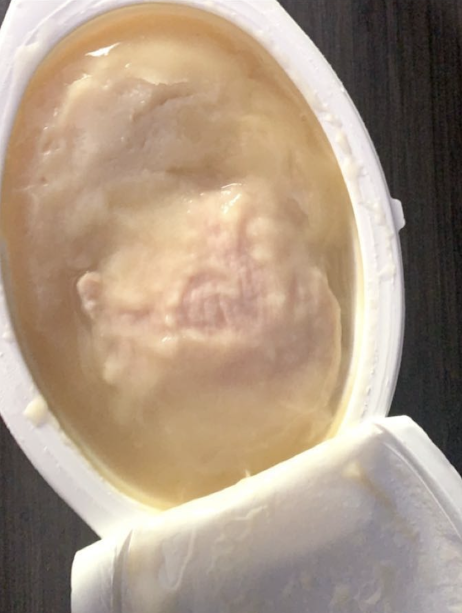 Two photos were obtained of types of food given to students in isolation and quarantine. Left: An example of a reheat lunch or dinner meal provided once a day. Right: Microwavable chicken dumplings provided in the initial nonperishables for breakfast or snack. Images courtesy of Laurel Taylor.

Redfern Health Center is engaging in contact tracing to help slow the spread of COVID-19 at Clemson University.

“It’s extremely important to the university and nationwide, and our aggressive testing regiment is being used to amplify it,” said Sarah Custer, the director of Emergency Management, in an October phone call with The Tiger.

The Tiger spoke to several students who indicated that their contact tracing began almost a week after their exposure. Lauren Magnon, a sophomore biochemistry major, shared her experience after testing positive during the spikes of cases after in-person instruction began.

“I was exposed on Sunday, but I was not contacted until the following Saturday. My friend, who I was exposed to, tested positive on Tuesday, and I got tested after I found out he was positive, but it came back negative. I wasn’t comfortable with it because all of my symptoms matched COVID, and then I tested positive that Friday,” Magnon said.

Dr. Lesslie Pekarek, the medical director of Student Health Services, went into detail about the contact tracing process with The Tiger.

“Any individual who tests positive for COVID-19 in the university system is entered into a database.  Our staff reaches out very rapidly to help give initial advice and facilitate isolation and quarantine for closest contacts,” Pekarek said. “This has become a more streamlined and timely process throughout the semester as we became more familiar with the workflow and grew our partnership with DHEC.”

Magnon, an off-campus resident, also shared her experience regarding her contact with the university after being told to enter isolation. “They just said stay in your room,” Magnon said. “My apartment called and made sure I didn’t need anything after I self-reported, but I never got any resources from Clemson. They didn’t call during isolation, only at the beginning and at the end of the 10 days.”

Nolyn Allen, a junior biochemistry major who is also an off-campus resident, had a similar experience when she tested positive before on-campus move-in. Allen tested positive during the time when there were 818 estimated active cases of COVID-19 at Clemson. According to Allen’s recollection, Redfern did not reach out to her for contact tracing and then called two weeks later in order to finalize some paperwork.

According to the CDC, COVID-19 symptoms have varied in type and prevalence for all who have tested positive, not only for young adults. Many cases are asymptomatic, and without surveillance testing like Clemson has done, the cases remain unreported and contribute to the undercount of positive cases.

“The vast majority of cases at Clemson are asymptomatic. It spreads from people that don’t know they have it,” said Dr. Corey Kalbaugh, chief epidemiologist for Clemson’s COVID-19 response team, in a call with The Tiger in early November.

Knoske’s case of COVID-19 was completely asymptomatic from start to finish, Magnon’s was minor with a fever, sore throat and congestion, while Wages’ was so intense it “felt like [she] got hit by a bus.”

Grace West, a sophomore health science major, experienced nausea, dizziness, a lot of fatigue and a loss of smell. She kept her sense of taste. “I slept a lot and drank lots of water, which helped out with my symptoms. Now I feel good, completely normal,” West said.

Allen, on the other hand, experienced some lingering symptoms, “My symptoms never actually went away. I just don’t have COVID anymore, which is annoying. I lost my smell and taste for a good month and a half, and while my smell isn’t really back, my taste is, but everything tastes different.”

Advice remained consistent between students interviewed by The Tiger. Besides making sure to wear a mask, social distancing and continuing to remain vigilant, some students pointed out that they found themselves testing positive despite taking all the right steps.

“Seeing how contagious [COVID-19] was and how I spent time with a few select people and still got it changed my perspective on the whole thing,” Magnon said.

Some students recommended taking Emergen-C, a vitamin C supplement, to help bolster their immune system. Others recommended taking Pepto-Bismol, an antacid, to reduce any nausea. Unfortunately, there is no cure-all solution to COVID-19 and its symptoms, so reach out to a doctor for specific medical advice.

However, in sum, Knoske may have put it best: “If we are careful about what we do and have the proper plans in place to isolate and care for those who have it, then everybody shouldn’t get it. You can do your part to not spread it. It’s there, it’s not over, don’t be stupid.”

Knowledge about COVID-19 is growing rapidly and the information in this article could become outdated as procedures are updated by Clemson University, DHEC or the CDC. For additional resources regarding COVID-19 at Clemson, check out the Healthy Clemson resource page.